A fundamental part of experimental economic research is writing pre-analysis plans, which serve as a commitment device for the hypotheses we wish to test and the number of participants we aim to recruit. In outlining the specific questions we are seeking to answer with a specific sample size, we can reassure future readers that the findings we describe are not a coincidence which we stumbled upon as we analyzed our data, lending increased credibility to the experimental results. The following sections describe one particular (preliminary) exercise conducted in the pre-analysis plan for a working paper of mine, Campos et al (2019).

Our project is a natural follow-up to a submitted project of mine, Goette et al (2019), in which we derive and test comparative static predictions of the KR model in the endowment effect context with heterogeneous gain-loss types. Specifically, we consider two types of agents: loss averse and gain loving. Loss averse individuals, roughly speaking, are defined as those who would accept a 50-50 gamble of +$10+x, -$10 for x>0; intuitively, these agents dislike losses around a reference point (assumed 0 here) more than equal sized gains, and would thus need to be compensated with a bigger payoff to accept the possibility of a $10 loss. The larger the x before they accept, the more loss averse. Gain lovers, in the same rough terms, would actually accept gambles where x<0 because, intuitively, they enjoy the surprise of the lottery, and enjoy gains above the reference point more than commensurate losses.

In Goette et al (2019), we show that lab participants previously measured to be gain loving vs loss averse respond quite differently to a treatment that is commonly used to test the KR model. Importantly, prior analysis of these types has tended to ignore the heterogeneity and test the treatment assuming that people are loss averse on average. Although this is empirically true, the 15-30% of gain lovers have an outsized role in aggregate treatment effects, which we uncover in our paper. The pre-analysis exercise described below applies this same experimental framework to a different domain, to explore whether these gain-loss classifications predict behavior in the real effort setting.

Before we run our experiments in this new domain, we want to be sure that the theoretical predictions yield interesting, testable implications that can be measured with reasonable sample sizes. To get a feel for this, we run simulations on bootstrapped data, allowing us to recover expected treatment effect sizes under heterogeneous populations. From the data in Goette et al (2019), we obtain a distribution of gain-loss attitudes measured in a lab population — which we assume to be representative despite the domain change. From Augenblick and Rabin (2018), we obtain MLE estimates of the cost of effort function under a particular functional form assumption, using the same task as we will in this experiment (see Table 1 for parameter estimates).  With these distributions of parameters in hand, we have all the requisite information to generate simulated behavior under the KR model, specifically the CPE assumption.

For a range of sample sizes, we bootstrap from these distributions and generate simulated behavior, which we subsequently feed into our regression of interest. For each of the sample sizes we consider, we store the estimated regression coefficient as well as the minimum detectable effect size (approximated by 2.8*SE(coef) as in Page 16 of these JPAL slides), which we ultimately plot against the bootstrapped sample. This plot helps inform us of what types of effect sizes we can reject at different sample sizes; by examining our simulated effect sizes, we are able to map the results and determine the number of participants we require.

Note that there are a number of simplifications in this code, and the final sample size will be determined using a slightly different procedure. Specifically, the analysis herein assumes we know the gain-loss value (lambda), whereas in our study, we will estimate it from experimental data. Because this introduces additional noise, we expect attenuation bias in our parameter estimates. This, and other details that were skipped over, will be discussed at length in the pre analysis plan; as soon as it is posted, I will link to it.

The resulting plot is displayed below. Our median effect size is roughly 15 tasks in this particular simulation, which would suggest a sample of about 400 to be sufficient. 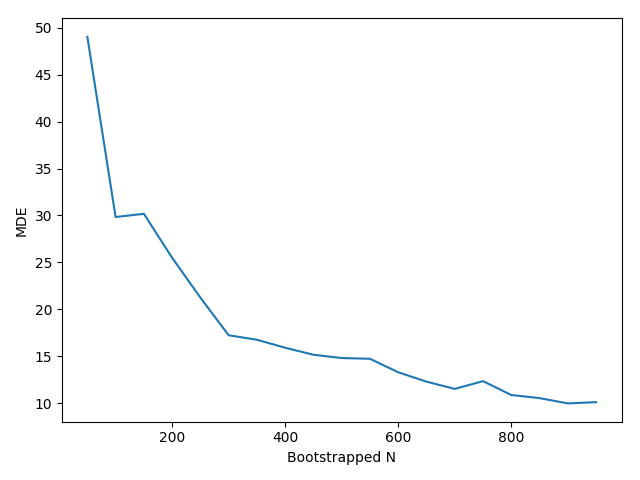